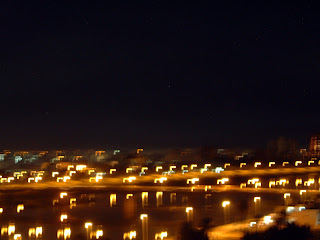 The last (and first) time I was in southern Iraq was 11 years ago, before the war. We drove 13 excruciating hours through the night from Amman to Baghdad in a knackered old utility vehicle in order to get to a conference celebrating 5000 years (to the day, of course!) since the invention of writing in Iraq. I remember being so ridiculously tired that I started hallucinating we were on the M40 between Oxford and London—and yet not daring to fall asleep in case someone needed to prod the driver awake. Every now and again he would shake his left arm vigorously out of the window, or slap himself in the face in order to keep alert. All the while, unlit sanctions-busting oil tankers were thundering past us in both directions and the spooky black basalt desert gradually gave way to pitch darkness. All that and the scariest customs check-point I have ever experienced. When we arrived at our hotel in Baghdad around 3am, it felt as though we had landed on another planet. And the sanctions-led communicative isolation from the rest of the world meant that we might as well have.

(I wish I knew how to do captions in Blogger. The top one is Baghdad by night in 2001, taken on my first ever digital camera; the one below is from the same trip. I put the full set of photos from 2001 on Flickr a few months ago with at least some basic tagging. I'll upload all my new ones there too but I haven't taken any yet... Wasn't allowed to at the airport, and then it was too dark or I was too tired to remember.)

And now I'm back in Iraq, again for a conference, but circumstances couldn't be more different. I flew straight into Baghdad from Heathrow with Austrian Air (with a brief stop-over in Vienna entailing a surreal dash upstairs to the security gate and then back onto the same plane). Bureaucratic confusion over my visa status at the airport was resolved slowly but smilingly, with the help of an enormous G4 security guard and my host Ahmed chatting amiably to the border guard on my mobile. No intimidating questioning or searches through my intimate belongings like last time (my digital camera a clunky novelty back in 2001), and my suitcase was even waiting in splendid unmolested isolation for me when I finally got through to the other side.

I met Ahmed online. That's really not as dodgy as it sounds, I promise! The short version goes like this: he read and liked my last book, and emailed to tell me that he was teaching a course on it at the Women's College at the University of Baghdad, where he is a professor of mathematics. You can imagine how happy this made me—my book being taught to Iraqi women maths students; can't get more perfect than that, right?—and it helped convince my editor that an Arabic edition would be viable. (It's in progress; should be out next year.) So we became email friends, and when Ahmed invited me this summer to give a keynote address to a big national mathematics conference, how could I say no? 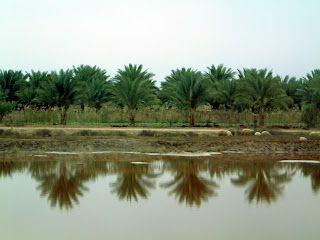 The airport itself (no photography allowed—it's still considered a target) is a real period piece, with lots of beige plastic and pot plants. It was closed throughout the No-Fly Zone era of course, and is only gradually building up commercial service again. In the years following the war, incoming planes had to drop into a steep spiral which they pulled out of just before landing to minimise the risk of attack from the ground. The area around the airport's still heavily militarised, with lots of those big concrete bomb-proof walls along the roads, and regular checkpoints amongst the palm-trees.

By the time we were out into more relaxed surroundings it was getting dark. At one point we were surrounded by a wedding party, comprising heavily laden minibuses and taxis extruding various undulating limbs. Tiny children clamber all over the insides of family cars: I swear I saw a pyramid of at least three tiny girls occupying one front passenger seat. At some checkpoints the guards just waved us through; at a couple our papers were checked (because I am a fair-haired novelty); at another Hisham told them he was our Afghan driver (he is in fact professor of mathematics at Al-Qadissiyah University, which is hosting the conference), to much all-round hilarity.

So here I am, surrounded by jolly mathematicians in Diwaniyah's swankiest hotel and generally being spoiled rotten. My good friend (and doyenne of Iraqi archaeology) Lamia Al-Gailani has rung to say hello from Baghdad and to check that I'm still up for a trip to Karbala together on Tuesday for some BISI-biz. (She was my guide around Baghdad back in the day too.) The conference starts on Sunday, my lecture kick things off. Tomorrow Hisham and Ahmed have been promised me masgouf and a trip to Nippur! But as tomorrow is almost today now, I should end here.