Welcomed to the heart of Shia Islam

Just back from Kerbala half an hour ago, where my hijab and abaya behaved perfectly, and where I met an extraordinary array of highly committed, energetic, well trained and imaginative museum curators, conservators and librarians at the holy shrines of imams Abbas and Hussein.

In short, Lamia Al-Galaini and I were there to discuss the potential for a long-term collaborative project between Al-Kafeel Museum and BISI. The project has three strands: conservation, research and public education on the shrines' collections. I have taken a zillion photos, and will be writing a formal (and positive) report for BISI in due course. But as I am completely exhausted by the day—in a good way—and need to sleep in preparation for another very public day tomorrow, for now I will just post a few pix. 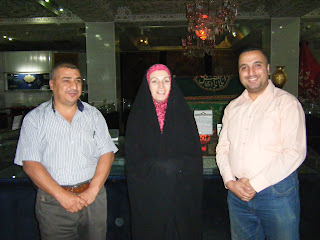 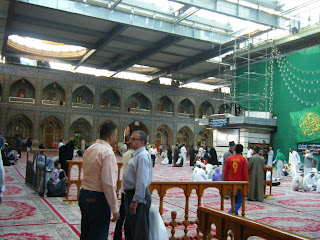 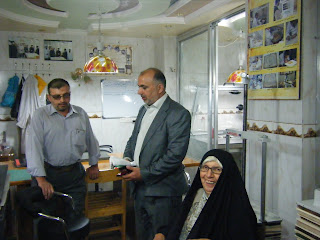 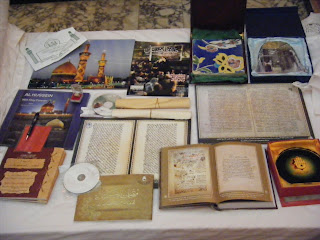 I don't yet have pix of our meeting with the Imam, a thoughtful, liberal and enterprising man whom, the museum staff say, have given them every support, financial and infrastructural, in their work, and is fully behind the nascent collaboration. He is the personal representative of Imam Sistani in Najaf and thus wields considerable political as well as religious authority. So it was a bit like having an audience with the Pope's right-hand man: an amazing honour and an indication of his commitment to what we hope to do together.

Nor do I yet have any photos from the mosque or museum of Imam Hussein, simply because I was so tired by then that it took all my energy to give Museum Director Mr Alaa my full attention. At this point the hijab and abaya came into their own as an all-enveloping comfort blanket and I snuggled into them in the car on 2-hour drive home too.

Dr Hanna taught me so well yesterday that at breakfast this morning the lady mathematicians were all absolutely delighted with my hijab. It stayed in place with only minor adjustments all day (you can see that magenta leopard-spots won out) and I eventually learned to hoick the abaya up at the back before I sat down to stop it riding too far back on my head. The academic gown analogy held up all day too; the abaya didn't feel at all uncomfortable or weird in the context.

Tomorrow, though, when I will be visiting Al-Qadissiyah University's current excavations near here, I shall revert to cotton trousers, walking boots and a loose shirt.

I should also say a few words about the Shrines Authority's brand-new translator, Mr Razak ("Raz"). He was on a first, trial day today so everything was as new to him as it was to me. Yet he coped marvellously, switching between technical descriptions of manuscript conservation and high-level diplomacy with the imam. He studied in Sunderland for 5 years in the 1980s and since 2003 has translated for various international NGOs in Iraq. He was also very easy company—translation is as cultural as it is linguistic, I am discovering—and was far more useful and interesting than the glib young person who travelled in our car with us. I do hope they keep him (Raz, not the GYP).

Today's checkpoint joke: that the driver of our Shrines Authority's big black Subaru with scary tinted windows has greater access to everywhere in Iraq—perhaps the world—than even the Iraqi Prime Minister, Nouri Al-Maliki, thanks to his fat wallet of 20-odd ask-no-questions ID cards. We sailed though every checkpoint, some extremely serious as Kerbala is a potential Sunni target, with a wave of the card— a different one every time.