Whatever made me think that today would be a quiet day, with plenty of free blogging time? The last time I spoke at an Arabic-language conference, in Amman a couple of years ago, I was one of about a dozen Euro-American guests, so wasn't always the centre of attention. This time, though, I was the main attraction: the sole "international" component of this International Conference. I've done interviews with ten or more Iraqi TV channels, not just about my talk but bluffing my way through questions about the importance of mathematics for rebuilding the new Iraq. I've had my photo taken with every mathematician in Iraq, it seems, in every possible permutation and combination. It's not surprising really, and it wasn't hard to relax into it, and everyone was very affable, but I'm not sad it's over.

My day (and Ahmed and Hisham's) was made much easier by the arrival of several more English-speakers on the scene. Many of conference partipants who were educated in the 70s, or in the past five years, wrote their PhDs in the UK: I heard happy reminiscences of life in Dundee, Manchester, Sussex, and a dozen other British cities.

The erudite and slightly lugubrious Dr Basim, expert in the novels of Henry James, was seconded from his professorial duties in the English Department to be my personal translator. But his own conversation was much more interesting than the official speeches, and he clearly enjoyed the opportunity to display his command of idiom. I shall adopt "terribly irksome" for my own, I think.

Diwaniyah Assyriologist Dr Saad Sina has been a long-time email correspondent of mine (yes, another online friend), whom I met for the first time today. We spent a happy hour or two this afternoon reading photos of Old Babylonian letters and economic documents from nearby sites. He is a very good cuneiformist and didn't really need my help, but it's always fun to read tablets and together we made a few small improvements to his already impressive readings. He'll be coming with us to Karbala tomorrow, as he's a good friend of Lamia's.

In preparation for the trip, Dr Hisham's sister-in-law has lent me a hijab and abaya so that I will be appropriately dressed for one of Shia Islam's most holy cities. (I won't have to cover my face, although somewhere in the back of a drawer I do have a niqab that a long-ago boyfriend bought me in the Gulf in a misguided attempt at a joke. Laughing at other people's sense of modesty is not my idea of humour; we parted company soon after.) 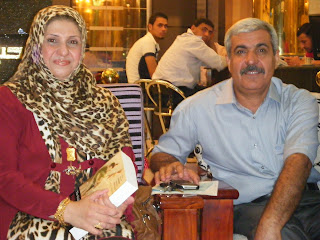 Hisham also introduced me to Dr Hanna Munther Ali of the University of Basra, who this evening became my Islamic fashion advisor... Here she is in a killer leopard-pattern hijab, sitting with her charming husband in the hotel lobby.

Dr Hanna whisked me up to her room for a practice session, and much to my surprise deemed the black headscarf I had been lent to be unsuitable. Apparently it was the wrong shape and too likely to inadvertently reveal hair. So now, thanks to her generosity, I am the proud owner of a magenta hijab and matching pins (which goes perfectly with my handbag and diary). 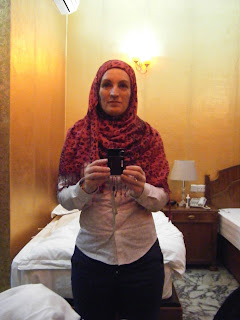 This is my first attempt at putting it on for myself. (Note the blingy gold walls of my hotel bedroom; it took several experiments with/without flash and wall lights to take this shoddy shot...) The finish isn't quite right yet: you can see that I haven't got the final, left-hand pin positioned correctly, so that the scarf is a bit baggy there. But before the last annoying micro-blackout (they last just a couple of seconds but then the wifi takes ages to reset) I spent 20 minutes or so watching some of Amenakin's chatty youtube hijab tutorials. I'm fully expecting Lamia to veto the pink leopard-print though, so I've also been practising with a dark grey scarf I bought a few Philadelphia trips ago, when I needed some protection against the icy air-con of Penn Museum's Babylonian Section. It never crossed my mind, as I was cruising Macy's sale, that it (or I) would end up going to Karbala.

I've been curious to try wearing an abaya (and to go to Karbala) ever since reading Elizabeth Warnock Fernea's amazing Guests of the Sheik (another Philadelphia purchase) several years ago. In the 1950s newly-wed Fernea lived with her anthropologist husband in a small village near Diwaniyah for two years while he carried out fieldwork. She was soon "adopted" by the local women who inducted her into traditional Iraqi life and even took her on Ashura pilgrimage to Karbala with them.

When I lifted the abaya out of the bag it seemed a familiar sort of weight and material, and then when Dr Hanna draped it over my head I realised why: it is a close cousin to my voluminous academic gown, which I had to wear quite regularly at Oxford for college dinners, governing body meetings and exam invigilation. In Cambridge though, it mostly hangs of the back of my office door, and once or twice a year gets slung over my arm as I go and make sure the exam paper I've set isn't riddled with typos and stupidities. So tomorrow shouldn't, I hope, be too much of a sartorial challenge, whether I'm in sober Macy's grey or chichi Basra style.

No pic of me in the abaya yet, simply for vanity's sake: the contrast between gold wallpaper and black fabric was too much for my cheapo camera to cope with and made me look white as a ghost. Tomorrow, I promise...