Here are more photos from yesterday's visit to the holy shrines in Kerbala, some taken my my host Ahmed Zainy, some by the shrine's official photographer (with many thanks to Ahmed for getting hold of them so fast). 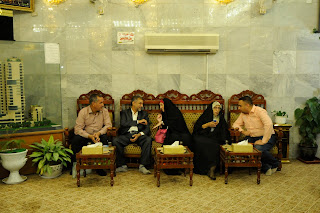 In the VIP reception lounge of Imam Abbas's mosque. I am chatting to Raz, my translator, and Lamia is catching up with Dr Mohammed the textile conservator's news. 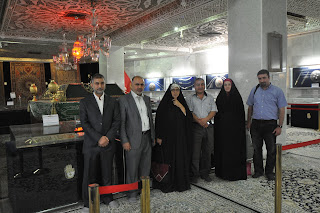 In the very Victoria and Albert-ish Al-Kafeel Museum, stocked entirely with objects donated to the mosque. As well as mosque furniture, coins and manuscripts there is a large collection of antique weapons—swords, daggers, pistols, rifles. These last commemorate the Battle of Kerbala in 61 AH (660 AD), at which the prophet's grandsons Hussain and Abbas were killed and which thus caused the split between Sunni and Shia Islam. 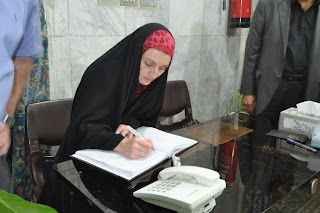 Signing the visitor's book, just before giving an interview for the shrine's magazine. Later I was interviewed for Karbala TV. I am so famous in Iraq now... (And in case you are wondering about the ring: no, I haven't just got hitched. That is the Ring of Argos, which has travelled everywhere with me in the Middle East for many years and whose powerful protective properties make it worth every penny of the tenner or so it cost.) 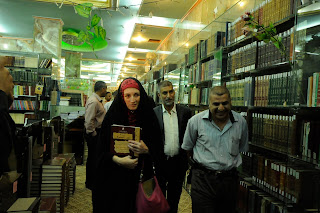 In the very well appointed research library. (From now on, you can take it as read that everything here is very well appointed...). They have a public library too, furnished in calm blond wood. Public education and charitable work are significant elements of the mosque's activities; there's a public kitchen too, where we ate lunch. The women on our table were given carrier-bags and take-away cartons so that they could take home what they couldn't eat (mutton and okra stew with rice). 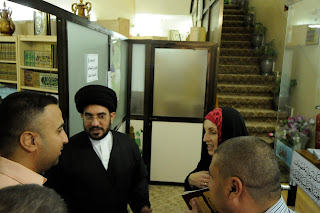 With the head of the mosque library, whose name I'm afraid I didn't catch. (I'm hoping Lamia will fill the blanks; I was so much the centre of attention—you can see that unfortunately the photos are all about me—that often it wasn't possible to scribble down people's names.) Most importantly, though, Mr Kamal the head of manuscripts conservation was full of praise for his bosses work, saying that he gives full support and funding, and wants renovation work to be carried out to the highest international standards. As far as we could see—and we were given an exhaustive tour—it is. 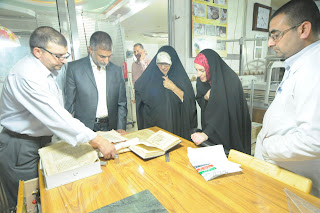 In Mr Kamal's spotless manuscripts conservation lab, a short walk from the mosque. They have separate rooms for biological and chemical treatment of the books, to kill infestations, unstick pages, and stabilise the paper. They also make their own paper to traditional methods to use for repairs, as well as rebinding the books while keeping as much of the original leather as possible. Here Mr Kamal is showing me a recently finished project, as one of his three staff looks on. All of them are educated to at least degree level and have had a lot of further specialist training in many different methods, so that they can judge which is techniques are most appropriate for each situation. They also carry out their own research and are committed to using traditional methods as much as possible. 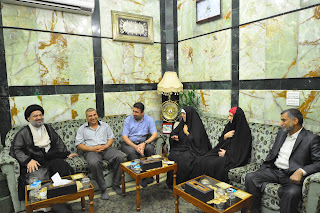 Meeting the imam. The big moment for the museum staff, for without the imam's go-ahead this project couldn't happen. In fact it was easy to find a lot of common ground, as I think this photo shows. He spoke very passionately about the need to use the highest scientific standards to conserve the shrine's collections, in order to further both research and public education. Muharram is just coming up—it begins on 5 November this year, with Ashura on the 14th—and we spoke of the pilgrims we had seen walking the road from Karbala. (No photos, I'm afraid—even if we hadn't been whizzing past behind tinted windows it would have seemed rude to treat them as spectacle.) The shrines get some 50 million visitors a year, most of them during this ten-day period, and so the museums will see heavy traffic then too. But put of the mission is also to educate non-Muslims about Shia Islam; all are welcome in the mosque as long as they are appropriately dressed and behave decorously. 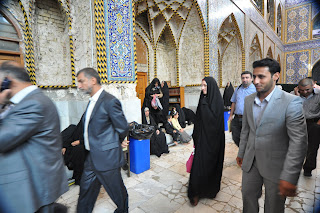 Our entourage walking through the main prayer hall of Imam Abbas's mosque (the GYP is front right). Again you can see renovations in progress: the yellow-and-black hazard-warning borders seem peculiarly apposite. 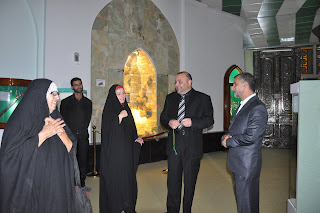 The museum of Imam Hussein's mosque is very different in feel and outlook to the one in Imam Abbas's mosque although are of an age—i.e., only three or four years old. There is more here about the history of the shrine, from pre-Islamic finds from the site—spotlit in the case behind us (plus three cylinder seals , much to Lamia's delight)—to the damage and looting inflicted on it by Saddam's forces in the 1991 uprising after the Gulf War. This is very much the personal vision of museum director Mr Alaa (centre, in black with the stripy tie; turns out he went to university with Lamia's daughter Nour!), while Abu Laith prefers to focus on the objects. 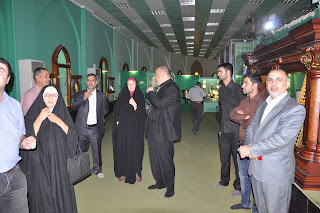 Note too the Shia green walls and simple carpeting here, compared to the rich blue-and-silver aesthetic of the first; and while Abu Laith's museum is open-plan, with wall cases around the edge and table-cases in the centre of the room, Mr Alla has arranged his cases to create sub-galleries while also, cleverly, spelling out Hussain's name when viewed from above. You exit the museum into a gallery looking down on the main prayer hall. This, says Mr Alaa, is the real, living museum and it is hard to disagree with him, it is such a captivating and restful sight.

As should be obvious by now, Lamia and I were treated with exquisite hospitality and attention for the duration of our visit, yet this was not mere ceremony. The staff here know they've got something good going on—though of course were delighted to hear us confirm it—and are keen to make it even better, and to share what they have. As I wrote yesterday, the collaboration is Dr Mohammed's initiative but the whole institution is fully behind it, so far as we could see; I am very excited at the prospect of helping to make it happen.