Arrival at the University of Kufa

(The internet at my hotel in Nejef had an uncanny knack of dropping just when I wanted to use Blogger. So I've been writing offline and will catch up with myself over the coming day or so in Baghdad. )

Coming into land at Nejef at first light this morning, the flat, flat landscape below looks strangely reminiscent of the fenlands I've just left: bright green strips of field separated by narrow watercourses glinting in the early sun. It's only once we get really low that the riverside trees resolve themselves into date-palms not willows. And then there's the fact that it's a balmy 20º C here already, not yesterday's subzero howling winds.

Hurrah for tiny Nejef airport's efficient immigration service (and hurrah for the kind man behind the visa desk at the Iraqi Embassy in London last Thursday). Hurrah too for Turkish airlines' delicious food but most of all hurrah for the besuited welcome party who met me at the baggage carousel at 6am. My host for the next few days is avuncular mathematician Dr Mansoor Habeeb (below), whom I met in Kerbala last October, most of whose family now live in snowy Bradford.

Managed a half-hour semi-doze before breakfast and the arrival of my new hijab consultant and translator, the delightful Dr Siham Al-Qawwaz. Magenta leopard-print is so last season but my new Accessorise butterflies pattern got vetoed too, and I was politely but firmly put into an elegant grey-and-pink check, which happens to match my suit absolutely perfectly. Siham herself (whom I haven't photographed yet) is in a black jilbab (floor-length gown) with seriously chic crystal trim. She's a comparative linguist, working on puns and figurative imagery in both Arabic and English, wanting to start publishing in international journals. Not my field, sadly, but maybe someone reading this can give her some practical advice? 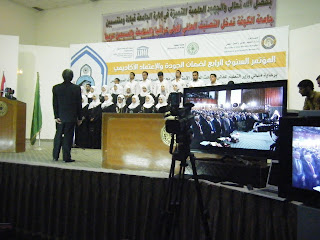 The pretext for this visit, as for the last, is a conference, this time on Quality Assurance and Accreditation in Iraqi higher education. 600-odd attendees, including two jolly expats now teaching in Dublin and California respectively. Opening session was the usual mix of worthies' speeches, powercuts and techno-shambles, plus the U.Kufa choir who launched energetically into the national anthem and the university song. A plethora of glitzy jilbabs plus suave conductor and OTT portable keyboard (just visible to the right), quite overwhelming!

Dr Mansoor did a fabulous job of translating my talk sentence by sentence, and then (mostly) fending off the crowd of people wanting to talk one-to-one. Instead I was ushered in to the office of Dr Ebtisam Almadany, the Dean of Education, where we discussed the problems of supporting women into senior management roles in higher education here in Iraq (she is one of three female Deans at U.Kufa). With us too was Dr Ebtisam Alkhammary, head of IT, and the charming Dr Hassan Ali (but everyone's charming here!), head of the postgraduate office, also attached to the Dublin Institute of Technology and a fluent English-speaker, who is championing their cause. Again, this is too much for me on my own, but maybe someone reading this might like to help mentor or support in some other way? 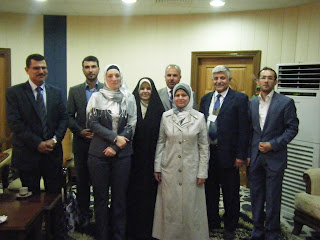 We were then joined by (all-male) team of Kufa archaeologists, whose department I'll visit and talk to tomorrow morning, once I've toured Dr Mansoor's maths department and Dr Ebtisam's computer laboratory. Here you see Mr Ahmed Al-Imarah, head of QA (far left), me and the two Dr Ebtisams, silver-haired Dr Mansoor, and various archaeologists (who didn't have cards and whose names unfortunately came and went before I had a chance to write them down.) Dr Ali had slipped away by then.

After the obligatory plaque-presentation ceremony and a slap-up lunch at a fancy restaurant—delicious rice with dill and broad beans and fantastic baked aubergine; no-one minded that I didn't touch the lamb shank—finally a chance to rest for a bit back at the hotel. I've worked out how to remove my hijab without taking the pins out, so that I can preserve Siham's handiwork and not look a shambles when we go to Nejef city centre this evening!