Ten Years On at Chatham House: from Collis to Hollis

While I'm whiling away the hours until my connection to Nejef, I thought I'd make the most of Istanbul airport's cheapo wifi—€1 flat rate!—and mains power to write a quick report of a brilliant but sobering conference organised by BISI's near neighbour Chatham House held on 19 March, called Iraq: Ten Years On. 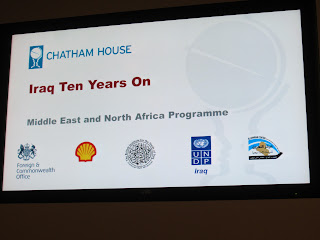 There are copious videos, audio recordings and transcripts on the Chatham House website so I'll limit myself to reviewing a few personal highlights. The first, most obviously, is that CH kindly gave BISI co-sponsor status in exchange for some advice on the programme. Our logo was bottom centre on all the big screens, much to our administrator Joan MacIver's delight.

Simon Collis, HM Ambassador to Iraq (and formerly to Syria) gave an excellent opening keynote, reminding us that the decade's retrospective should not be about hand-wringing or reliving old grudges against the UK/US politicians then in power: Iraq has moved on and so should we.

Indeed, common threads running through the day were optimism about Iraq's basic economic indicators and potential for future growth, intertwined with frustration at political intransigence, corruption and the endemic victimhood that fuels continued sectarianism. This last idea from the excellent Fanar Haddad in the best panel of day, on Iraq's political systems, chaired by recent BISI grantee Nussaibah Younis. Zaid Al-Ali on the Iraqi constitution and Haydar al-Khoei on Shia religious authority (confirming my positive impressions in Kerbala last October) were also very impressive. 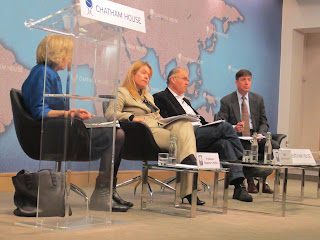 The final panel of the day featured the incomparable Rosemary Hollis (far left), reflecting on the extent to which the Iraq war ten years ago should inform western government's responses to the current Syria crisis. Hollis also gave an impressively robust response to another panellist, Jeff Macris (far right—how apposite), who characterised the Gulf region as "endemically anarchic". Much to the audience's surprise, he blamed the region's current problems on the UK's withdrawal from the Trucial States in 1971, hinted that democracy was not a good fit for "the world's oldest societies" (as if they were still all Early Bronze Age city states) and urged the necessity of a (western) superpower to maintain order. Sadly I had to leave before the end of the question session but I sensed that Macris's neo-neoconservatism was not the majority view, thank goodness. CH's Jane Kinninmont (centre left) was chairing with an admirably tactful neutrality.

Last but not least, heartfelt thanks to Claire Spencer, head of CH's Middle East and North Africa Programme, and all her staff for putting on such a thought-provoking day and for making BISI a part of it.