Frustratingly, my 8am pick-up didn't transpire this morning, as the driver overslept. We finally got going at 10 o'clock with a tour of the mathematics department, followed by a visit to archaeology and a lunchtime meeting with the University's president. We ended the day at the graduation ceremony/celebration for the 30 mathematics students who have just completed their BSc's here. But the fish, cake and (fizzy, not snorty) coke parts of the day deserve a post to themselves

The university is on a green-field campus half-way between Nejef and Kufa. It was founded in 1987 but was closed down for a few years by Saddam after the 1991 uprisings and then stagnated (as did many Iraqi institutions) during sanctions and the first years of post-war instability. But in the past five years or so the university has come to life again. It has a pretty decent English-language website, which is worth checking out.

The mathematics department, for instance, was created in 2008, as one half of the Faculty of Mathematics and Computer Science. It has five clean, bright classrooms, four of which were in use while I was there, plus a lecture hall which seats 150 and a newly-refurbished graduate seminar room with data projection and interactive whiteboard. The library was full of studious young persons, and they manage to keep up with textbook purchasing. The teaching staff whom I met were all energetic and committed. Statistician Dr Nazera Dakhil, for instance (the woman in the photos with me), splits her life between here in term-time and home in St Albans during the university vacations. Several of their students are winning scholarships for further study in the UK and elsewhere, of whom they are justifiably proud. 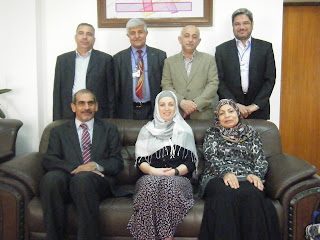 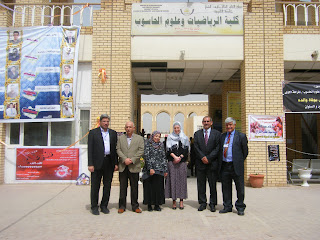 Jolly archaeologist Dr Ali Naji is back far right in the first photo; far left in the second. He was there to make sure I actually got to Archaeology and the mathematicians didn't keep me forever! Dr Mansoor is second left (first) and far right, apologising profusely for the delayed schedule. Dr Nazera is next to me; plus the Dean (striped tie) and Deputy Dean (beige jacket) of the Faculty.

Compared to my own Cambridge department, however, there are a surprising number of administrative and other support staff, who seem to be rather less busy than their UK counterparts. My colleagues were surprised to discover that I don't have a secretary, for instance. The secretaries I've seen here in Iraq, in universities and cultural heritage institutions, mostly serve as gate-keepers and status symbols, as far as I can see. As discussed at the Chatham House conference session on National resources and the Iraqi economy, the majority of state spending is still on salaries, and job creation is one of the few remaining sources of central government legitimacy.

Once I'd greeted everyone in maths, I was whisked off to the old campus to meet the archaeologists. We were running so late that we had to speed past the excavations of the old city of Kufa--founded in just 16 AH (637 AD). I never got a chance to see the great mosque of Kufa either, but that's a good reason to come back another time.

The archaeology and cultural department's housed in a former hospital. Sadly I had hardly any time there. A quick chat with the Dean, Dr Taher Al-Waely, in his office with gold-brick wallpaper, about the frustrating lack of cultural heritage legislation at a time when huge construction projects are going up all over the place. Then to my lecture, which I had cobbled together from a course I used to give in Cambridge, given in another very well appointed lecture room. 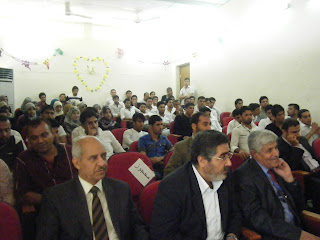 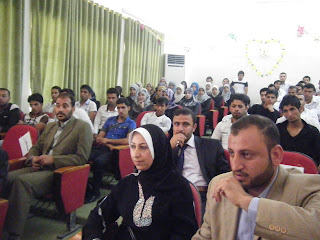 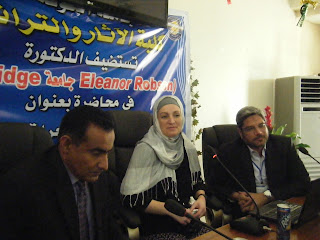 In the front row are Dr Mansoor (far right of first pic), Dr Siham and Mr Mu'amal (second pic). The Dean of Archaeology and Dr Ali Naji flank me on the podium. Note the fancy projection screen above the banner made in my honour! (There are lots of banners here.)

I'd been asked to speak on European views of ancient Iraq, so I gave a simple history of the origins of Assyriology. I talked about the importance of Classics and Biblical study in the early 19th century, and the unfavourable views they presented of their threatening eastern enemies/neighbours. I also talked about the geopolitical importance of the region as a potential shortcut to India and the Far East, so that the earliest systematic explorations related to mapping and surveying. And then I gave a quick overview of the professionalisation of archaeology: from collecting beautiful and curious things for museums to systematic, documented stratigraphic excavation. My aim was to explain why Westerners had become interested in the first place, how entangled in politics Assyriology and archaeology have always been, and how Biblical and Classical obsessions focussed attention on the ancient rather than the Islamic past.

It generated a gratifyingly lively debate amongst my colleagues but frustratingly I got whipped away again, this time to meet the president of the university, Dr Akeel Abd Yasseen. A geneticist with a PhD from the University of Ulster, he took over the presidency a couple of years ago and has been vigorously engaged in improving the university's national and international standing. He's particularly keen on improving the (British) English-language abilities of his students and staff and on providing facilities for visiting researchers. 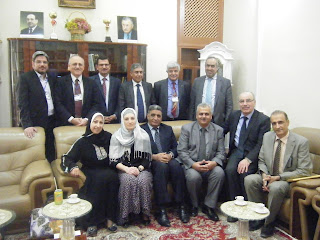 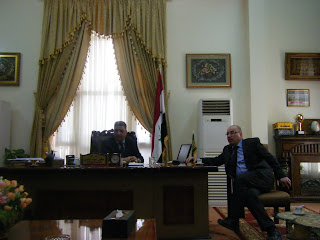 Ramzi and Mohammed are regular visitors and advisors, another way in which Iraqi academics abroad contribute to their country's academic regeneration. Here Dr Akeel and Mohammed share a joke. (There are always lots of jokes.) 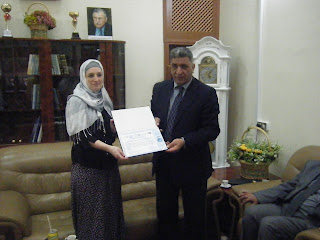 I am presented with my certificate of conference attendance—which has to be reprinted twice because Dr Akeel rightly won't stand for typos in the English, whether of "Kambridge" (as in Kufa, of course) or of his own name and title!

The university's advisor for international relations, Dr Abbas Al-Aboudy, was also at the meeting. He's a more recent UK returnee, a practising surgeon with plans to expand the teaching hospital here, with a special focus on paediatrics and neonatal care. There's a deep well of Anglophone Anglophilia amongst older-generation Iraqi academics, plus the youngsters who are now going out on scholarships. BBC World was on mute on the big flat-screen TV in Dr Akeel's office and at one point the conversation turned to the relative merits of Eastenders vs. Coronation Street!

(A blast from the past at one point, when an enormously fat military man came in, sporting a huge, and now deeply unfashionable Baathist moustache and a giant turquoise ring. He had a leisurely chat to Dr Akeel and then wandered off again; his presence remained entirely unexplained. I wish I'd had the cheek to photograph him...)

On our way to lunch, Dr Akeel took us to see the new guest house which is about to open, comprising several well-appointed apartments and even a gym in the basement. Next stop was a new staff canteen neear the university library--there's currently nowhere for staff to socialise or eat together. There will also be a bank and a supermarket nearby. Stupidly, I had left my camera in the car so I can't show you any of this. But as far as I could tell, all of these projects are being finished to a higher standard of taste and quality control than one often sees here. And it's very interesting that the university is investing in this sort of research support infrastructure. It's streets ahead of poor old Qadissiya university, which I visited last October.