Yesterday's group outing to Nejef city centre took in the old caravanserai Khan Shailan, some of the souk, and most importantly the shrine of Imam Ali, the prophet's son-in-law and cousin and the fourth caliph, who ruled from nearby Kufa and was buried here in 40 AH (661 CE). That was pretty amazing for me as a historian as he represents the very beginnings of Islam in Iraq.

At the other end of the historical scale, Khan Shailan is an Ottoman-period caravanserai, or inn, in which ten British soldiers were imprisoned during the 1920 uprising against the British occupiers. The building had fallen into disrepair over the 20th century, compounded by shell damage during the 2003 war, and earlier concrete "restoration" which had collapsed. Local archaeologists and civil engineers have just finished a rather splendid restoration project on it. There are now plans to turn it into a museum of the uprising. 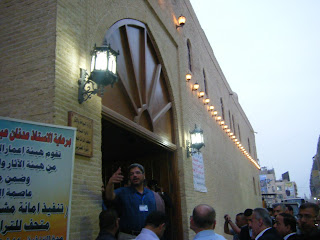 Dr Ali Neji introducing us to the building 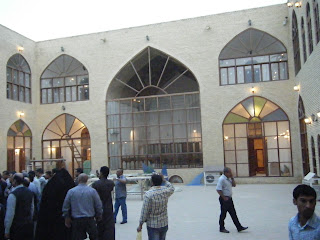 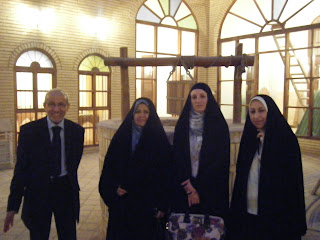 The main courtyard (with, below, Dr Ali Hassan and Dr Ebtisam the computer specialist, with whom I discussed mentoring women academics yesterday; and my lovely translator Dr Siham). 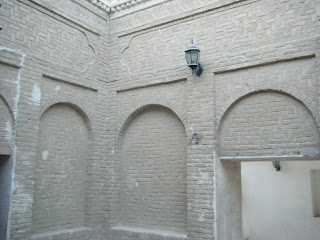 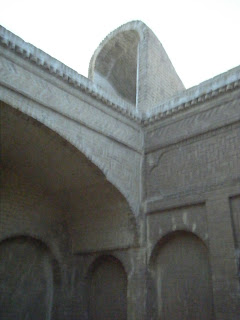 Lots of beautiful traditional brickwork, including some impressive (restored) ceilings and the charcoal sketches left by the British soldiers: mostly head-and-shoulders drawings of people but also a rather sad-looking horse. One of a young woman in a hat, whom the archaeologists say must have been the fiancée of one of the captives! The tour was led by the knowledgeable Dr Ali Naji Attiyah, and Mr Mu'amal, who are closely involved in the restoration work here and in the rest of the old town. Mu'amal (whose hand you can see pointing to the sketch) wrote his MA thesis on the building. 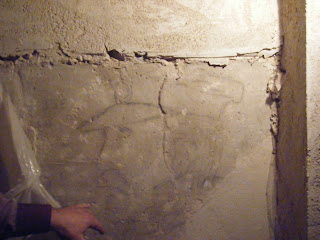 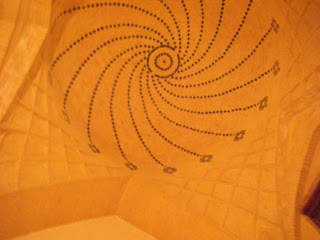 It features traditional air-conditioning features: open-topped rooms which act as ventilation shafts to draw air in from the roof, and a sirdab, or basement, which is naturally cool in summer and warm in winter. We couldn't go down, as it's still full of construction equipment, but could feel the drop in temperature even from the top of the stairs.

On the way to the shrine we passed through the souk, mostly just the usual clothing, shoes and housewares, plus large mounds of sticky pastries and sweets. But there were also some very fine silver and goldsmiths near the main entrance to the shrine. Here and there one can see glimpses of old walls, including the now rather delapidated remains of a once very prominent madrasa (first photo below). 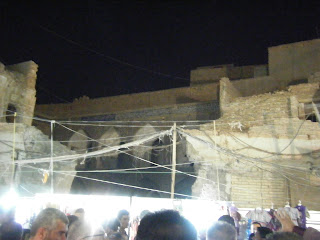 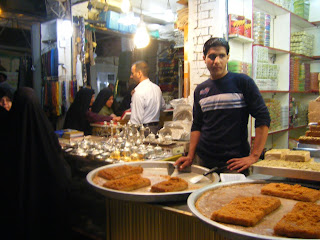 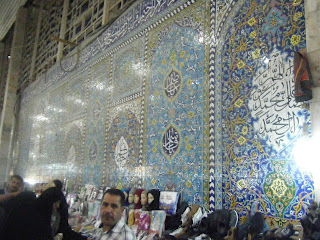 Night had fallen by the time we reached the shrine, whose entrances were crowded with people. Pilgrims regularly come from Iran, Pakistan, and all over the world. Apart from the brightly lit gates there's not much to see from the outside, and indeed no obvious vantage point to see it from, as there are no large open spaces around it. Rather, all the action, and all the splendour, is on the inside. 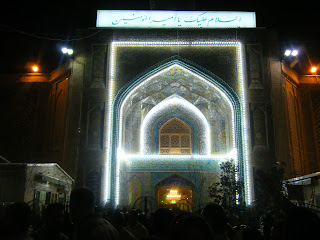 At the shrines of Imam Ali and Imam Hussein in Kerbala, I took copious photos as that was what I was there for. It wasn't so appropriate to do that this time, so I don't have any pictures of the main courtyard, apart from the few that Dr Ali took of me with Siham and Ebtisam. I can't find any decent pictures of the courtyard on Google either. But it is similar in scale to Imam Ali's shrine in Kerbala, though with a rather different colour-scheme to the tiling. Here the emphasis is on yellow-gold, with recessed panels of cream and green. Most is relatively modern but Dr Ali Naji pointed out two large panels of very fine Safavid tiling higher up, on the central building surrounding the shrine itself. The archaeologists persuaded the shrine authorities not to replace these, even bringing in an expert from Iran to explain the historical uniqueness of the dusky pink glazing that they feature. 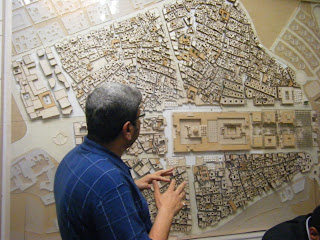 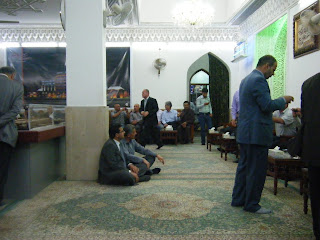 In the reception room at the back of the shrine (where later we drank lemon sherbet and I quietly coveted the carpets), Dr Ali showed me the restoration and preservation project that they are implementing in the old city. At the back of the shrine (to the right in the photo), during the Saddam era a huge swathe of buildings was swept away to make way for an underground car park. A gigantic pit was dug, without any archaeological recording. (We walked past it later in the evening: it is enormous and one can see the remains of graves in the sides.) This area will now become extension to the mosque which will pretty much quadruple its size. This will provide facilities for the many millions of pilgrims and visitors the shrine receives every year. There are also plans for the heritage buildings in the old town too (which are the darker ones on the plan), so that they don't get demolished to make way for pilgrim hotels and the like.

Perhaps the most moving part of the visit, though, was when Siham took me through the women's entrance to see (and touch) the tomb of Imam Ali himself. Many of the women surrounding us had come hundreds, even thousands, of miles for this, often at great personal expense, and the intensity of their emotion was palpable (as indeed were some of their elbows). For Siham, and some of the other Nejefi women academics I talked to, the shrine is an integral part of their lives. It is a place to come for contemplation and reflection (more easily achieved in the outer courtyard, where it is easy and natural to establish private space), especially in times of trouble or stress. (No doubt many men would say the same; but I haven't tended to have those sorts of conversations with them.)

Given the upheavals of the past few decades, the lives lost and the families broken, I can see how vital Shi'a Islam has been in healing indeividual sadness and anger. In the shrine I was also reflecting on Hayder al-Khoei's words at Chatham House the other week, about how tolerant the Shi'a population of Iraq have been in the face of repeated Sunni attacks on their places of worship over the past decade. (It's the main security risk now: later, in Baghdad, one of the Embassy security staff briefs me that the only real targets these days are Shi'a gatherings outside the holy cities, and high-profile election candidates.)

As we leave the shrine, at about 9pm, it suddenly hits me that I have been awake for pretty much 36 hours non-stop now. I beg off dinner and don't even manage to stay awake in the car to the hotel. Somehow I have to get a decent night's sleep and prepare a half-hour lecture for the Archaeology department (on European views of ancient Iraq) before 8am tomorrow morning...