Cake and fun at the mathematicians' party

It so happened that this year's cohort of graduating mathematicians were receiving their degree certificates this evening, so Dr Mansoor and his colleagues very kindly invited me along to the party.

It was an outdoor event, held in the grounds of one of Saddam's former palaces, on the banks of the Euphrates. The building is now managed by the governorate, and used for all sorts of public occasions. It was too dark to photograph the building well, and I can't find any pictures of it online, but this rather blurry Google Maps image shows its extraordinary shape, overall whiteness, and--if you zoom in further--you can just make out the two modernist gold domes on either side of the entrance.

We drove there along the riverside road, a sort of corniche lined with outdoor restaurants and brightly lit cafes, clearly the centre of Kufa's nightlife. Lots of smartly dressed young persons and their proud families were pouring out of the carpark, clutching elegant white invitation cards.

I was given a seat in the front row, next to the Dean of the Faculty, with Dr Nazera and Dr Mansoor beside me. It was the perfect place from which to observe the occasion, a mixture of student-led jollity and silliness with formal ceremony. Much wild dancing from the young men to left of the stage, lots of jokes and skits and spoof videos (from both sexes) on stage. The graduating cohort call themselves "The New Numbers" (in English) and for the more serious parts of the evening wear slim-fitting academic robes banded with green, plus large mortarboards which nevertheless perch somewhat precariously on the girls' hijab.

Particularly supportive family members are presented with roses by grateful students. The Dean makes a speech (which I'm afraid no-one much listens to). Teachers also get certificates and thank-you gifts, presented to them individually by the students. Dr Mansoor gets an especially loud cheer when he goes up to receive his. "I've got a pile of them this high now", he whispers on his return. 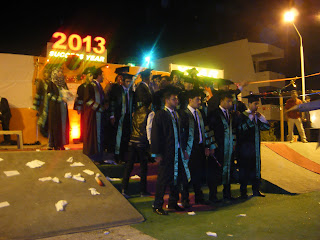 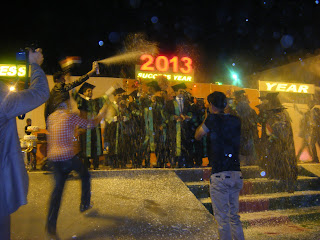 The governor of Nejef arrives half-way through the evening to present the awards. "He's standing for re-election", my hosts whisper, "Politicians are the same everywhere." But later they also tell me that he's done a lot of good for the city and they rather like him. He's yet another UK returnee. It seems as though our Iraqi refugee programme, resented though it sometimes was at the time, has turned out to be a significant factor in post-war capacity building.

Both Nejef and Kufa are drowning in electioneering posters, in fact, for the local elections later this month. Enormous, brightly coloured, featuring the candidates' portraits (male and female) and their candidate numbers festoon all the main streets and bridges. My hosts are much amused by one woman standing for election who is using her husband's photograph instead of her own. "Who are we actually supposed to be voting for? Why doesn't he just stand himself?". (Here's a nice report on election posters from Al-Ahram newspaper but no pix unfortunately.) 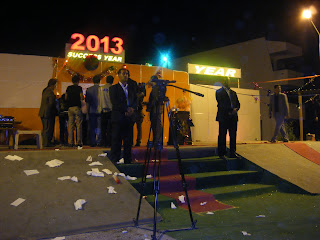 It's just as well there have been group photos taken earlier in the evening, however, as the governor's team of minders, together with the local film crews, make it impossible for us to see the actual moment of presentation. Each graduand emerges from the huddle beaming, though, clutching not only their degree certificate but also a box containing high-end smartphone. 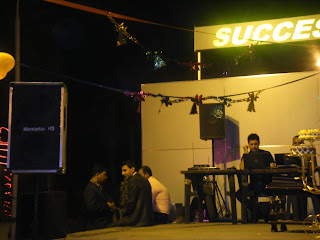 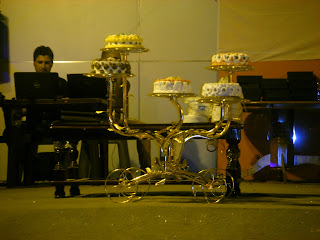 Finally, the governor starts to cut the fancy cakes that have been the centre of my fascinated attention all evening (them and the Christmas-tree decorations). More photos, of students, families and teachers in various combinations, and then it's finally time to go home, full of cake, coca-cola and optimism for the New Numbers and the rest of their generation.